Fieldlab „The Smart Connected Supplier Network“: one language for all data (this interview has been written for the Hannover Messe 2017)

One language for all data

Orders, plans, technical drawings and invoices are just some examples of the documents containing the endless amounts of data collected as part of day-to-day operations in the supply industry and which need to be exchanged between various different parties. Yet, due to the many different data processing systems that exist problems often occur, for example, incompatibility, lost time and susceptibility to errors. Set up in order to solve these problems, the “Smart Connected Supplier Network” field lab was first officially showcased at Hannover Messe in 2016. Now, one year later, its aim is to find a common denominator between all systems, and it has already come one step closer to doing so. “We support the development of a common language”, emphasises John Blankendaal, Managing Director of the Dutch supply network Brainport Industries.

“At Brainport Industries we work with many suppliers who use different systems, which often means that the data has to be inputted manually. That has lots of disadvantages”, says Project Manager Peter Laloli. “We therefore need to ensure that the data is interoperable so that different systems can interpret it at the same time.” This will in turn reduce the companies’ workloads and hence contribute to reducing costs – and also in turn increase competitiveness.

Another important aim is to significantly simplify data sharing. As a result, it should be possible for customers and suppliers to exchange product and design data and quote and order details, for example, without any complications. According to Laloli, however, that is not as easy as it sounds. Finally, various standards need to be adhered to. “We need to be able to ensure that no data gets lost and that the systems cannot be hacked externally.”

The field lab is working on the implementation of those points together with scientific institutes and companies from the supply industry. This is an advantage as developed theoretical solutions can be directly applied in practice. “We also don’t want to force anyone to use a new data language but instead enable existing systems to understand each other”, says Blankendaal describing the concept behind the field lab.

The “Smart Connected Supplier Network” field lab has set up two working groups. The working group entitled “Interconnection Levels and Translation Table” focuses on the automatic translation of information that two parties share with each other.

Members of the “New Secure Information and Communications Technology” working group focus on improvements to the information infrastructure between parties in the supply chain and related security aspects. In cooperation with the German Industrial Data Space programme research is also being conducted into which intermediary structures are required and how they can be made secure.

For the latter project, the field lab is working together with the Thales Secure Connected Systems field lab. The working group is also developing solutions to enable the new information infrastructure to be understood with existing systems such as ERP and technology such as the XML data exchange. 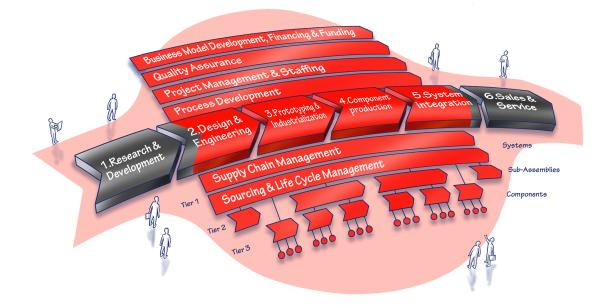